Donner House has developed into the loved community that it is today because of its quirky and original traditions. The history of how Donner House came to be is not well known at Carnegie Mellon. The original building only consisted of the central core, which is today the lounge, reading room and foyer. It was built to serve as a common space for residents of the Hill to mingle outside of their respective dormitories. Donner became such a well-loved communal destination that when CMU needed to expand its residence halls, they decided to build on the already successful Donner community. Construction on the East wings of Donner began in 1956. So many people requested to live in the new Donner House that in 1958, they began to build the West wings. Just as the actual Donner building has grown, so to has the Donner community due to the love and connectivity between its residents. 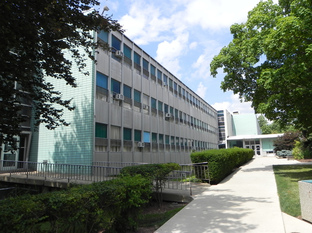 Donner House has blue tinted windows, which can be seen from the outside, and blue accents inside. This is what earned the building the nickname "Big Blue." For the same reason, Donner House has the distinct honor of owning the color BLUE during Orientation's main event, House Wars, when each of the first year housing communities is assigned a color. Embracing the majestic color of blue and the warm community that Donner had developed, each year new students are welcomed into the Big Blue Family that is past, present, and future residents of this Donner House.

Donneroos (noun): The collective term for a group of residents of Donner House is Donneroos. According to historical memory, this is not a combination of the words Donner and Kangaroo, but the true origin is no longer known.